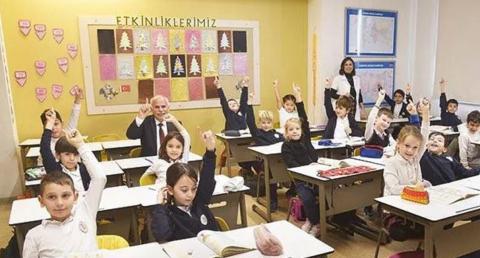 More than 21,000 international students from 92 countries are receiving education in the southern province of Antalya, a tourism hotspot that is becoming a preferred choice for foreigners looking to move out.

Welcoming thousands of tourists every year as one of the most popular holiday destinations of the country, Antalya has also become the preferred place for foreigners looking to migrate.

Especially since the beginning of the Ukrainian-Russian War in February last year, the number of foreign tourists residing in Antalya has gradually increased. This situation is also reflected in schools in the province.

These international students study together with Turkish students to ensure their education is not interrupted.

Of the approximately 492,00 students receiving education in nearly 1800 primary and secondary schools in the province, 21,284 are foreign nationals.

They are followed by Ukrainian students with about 1,000 children.

In addition, there are more than 20,000 insured employees from 130 countries in the city. The number of resident foreigners allowed for residence approached 200,000.

With the outbreak of the Ukraine-Russia war, the southern province has become a preferred destination both for holidays and settling down for Russian and Ukrainian tourists.

In the first 10 months of 2022, Türkiye welcomed around 586,000 Ukrainian tourists, down 70 percent from the January-October period of 2021, according to the latest data from the Tourism Ministry.

Some 13.1 million foreign tourists visited Antalya, on the Mediterranean coast, in 2022, marking a 48...

Interior Minister: Bulgaria has Still Not Received an Answer from Russia as to Why Christo Grozev is Wanted