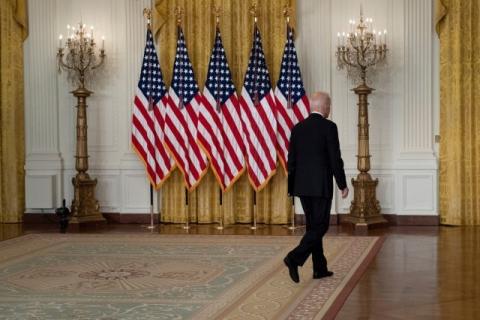 This concept of foreign policy behavior has left the United States in a quandary, as Washington fears that Moscow is deliberately complying with such measures, preparing to strike back at the West. This was announced by the political scientist, Dmitry Kulikov, live on the show "Evening with Vladimir Solovyov".
Kulikov did not ignore the report of the American strategic research center RAND, which focused on the confrontation between Russia and the West in Ukraine. According to political scientists, American analysts admit that Russia's strange tactics are taking Americans to a dead end.
Moscow completely ignores the provocations, which greatly disturbs Washington. Experts are sure that "there are no more good moves for the United States" since Russia could deal an unexpected but painful blow to Western countries.
As a result, analysts come to the conclusion that it is better to do nothing, wherever Russia strikes since there are simply no more good moves for the US. So, Washington admits that Moscow's strange, overly soft tactics have led the United States to a dead end," the political scientist concludes. According to him, American analysts were confused by Russia's strange tactical decisions. They admitted that the psychological methods used by Moscow have a somewhat effective effect against Washington.

Interior Minister: Bulgaria has Still Not Received an Answer from Russia as to Why Christo Grozev is Wanted