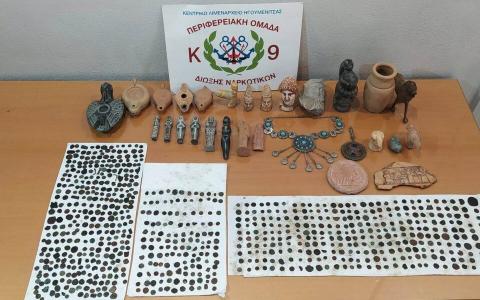 Two people were arrested on Monday night at the port of Igoumenitsa in northwestern Greece for violating laws on the protection of antiquities and cultural heritage after they were found in possession of hundreds of ancient coins and other items.

Officers at the entrance gate of the external port of Igoumenitsa searched the private vehicle of the suspects, aged 52 and 49, and found the items carefully hidden in the luggage compartment. Twenty-eight objects (statuettes, necklaces, pendants, lamps, vases, etc), probably ancient, and 779 ancient coins were seized.

Authorities said the suspects planned to illegally transport the items abroad. They have been delivered to the Ephorate of Antiquities of Thesprotia for further examination.