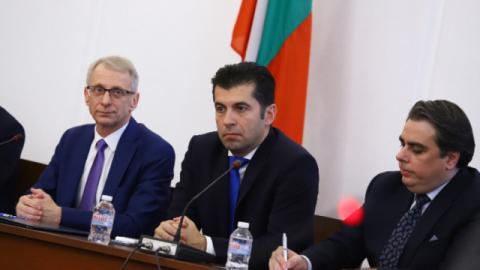 "We Continue the Change" held a meeting with the parliamentary parties in connection with obtaining the second mandate and the national priorities for forming a government. BSP, "Democratic Bulgaria", "Bulgarian Rise" and "Vazrazhdane" came to the meeting. BSP said "no" to the proposed declaration, "Democratic Bulgaria" said that they would rather support it, and "Bulgarian Rise" has not yet made a decision.

"Let's see where the lines are that we can cross and which we can't, so that we can prepare a common document," said Acad. Nikolay Denkov at the beginning of the meeting.

According to him, there were no talks with anyone regarding personnel, but only about the principles of a possible cabinet.

"There must be strong political support and each person must be an expert. Today we have two goals: To see if we have agreement on the text of the draft decision. If something new is proposed, it can be included. This must end today on this meeting. We made every effort to hear the different points of view. The invitation was to all political forces, there are no preferences," commented Nikolay Denkov.

"You cannot try and make government for the sake of the government itself, on the basis of unprincipled compromises. The executive bureau of BSP and the leadership of the parliamentary group examined the proposed project with priorities. We positively evaluate the desire of 'We Continue the Change' to create an environment of dialogue, with reflected priorities of the parties,...