113 migrants pushed back by Greece rescued 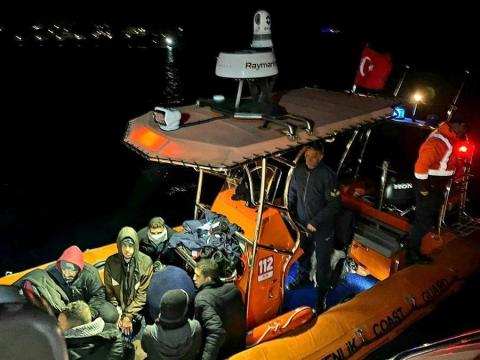 Some 113 immigrants pushed into Turkish territorial waters by Greek authorities have been rescued off the Aegean province of İzmir.

Turkish Coast Guard Command teams were dispatched to the regions upon the information that there were immigrants in life rafts off İzmir's Dikili, Seferihisar and Çeşme districts at different times on Jan. 1 and 2.

The teams rescued 113 migrants pushed back into Turkish territorial waters by Greek authorities.

Meanwhile, another 37 migrants seeking to illegally go abroad were caught off Dikili.

Greece pushed back nearly 42,000 asylum seekers between 2020 and May 31, 2022, according to a report published by Türkiye's Ombudsman Institution.

Türkiye has been a key transit point for asylum seekers who want to cross into Europe to start new lives, especially those fleeing war and persecution.

Türkiye, which already hosts over 5 million refugees, more than any country in the world, is taking security measures within and on borders to prevent an influx of migrants.