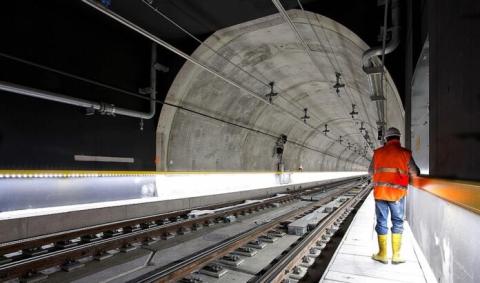 Ten years after the delivery of the last major extension of Line 2 of the Athens metro, which today connects Anthoupolis with Ellinikon, a new esxtension is on the way. Attiko Metro yesterday turned the hourglass of the tender for the extension to Ilion with approximately 4 km of new line and three new stations. Traffic congested Western Attica is finally on track for new infrastructure projects, as is the extension of the Suburban railway that will connect Ano Liosia with Megara, for which the tender was launched before the holidays by OSE.

The new extension of Line 2 has been designed to cover many densely populated areas of Western Attica, while in the future it is also going to go towards Acharnes. There is provision, in the context of the overall planning of the metro network of the capital, for a response to the Ilion station with the future extension of Line 4 to Petroupolis.

It is estimated that the new section of the extension of Line 2, after Anthoupolis with three stations in Palatiani, Ilion and Agios Nikolaos, with a length of about 4 km, will serve at least 67,000 passengers daily, the number of citizens who will be served in terms of their residence within a radius of 500 meters from the 3 new stations will rise to 42,000 and the corresponding jobs served are estimated at around 5,000.

Mapping of the new stations

Palatiani station is located at the intersection of Thivon and Andreas Papandreou streets and has two entrances on either side of Thivon, with the depth of the station reaching 22.5 m from the ground surface. The Ilion station will also be located on Thivon, with two entrances on either side, at the intersection with Elaion street , which will reach 24 meters below the surface of the ground. The final station Agios...