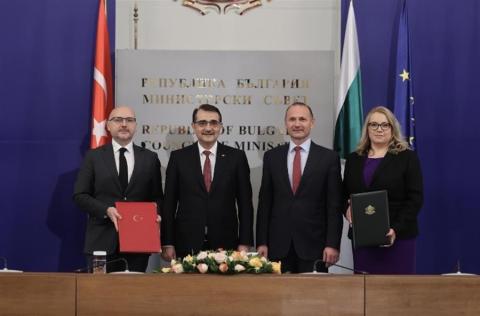 Bulgaria on Jan. 3 gained access to Türkiye's terminals and gas transmission network under a long-term deal that will help the country replace supplies once provided by Russia.

According to Bulgaria's Energy Minister, Rosen Hristov, the agreement solves the problem of Bulgaria's lack of sufficient infrastructure for unloading liquefied natural gas.

Bulgaria, which ahead of Moscow's invasion in Ukraine was almost fully dependent on Russian gas, is looking for alternative gas supplies at reasonable prices after Russia cut off deliveries in April over Sofia's refusal to pay in rubles, the Russian currency.

Under the current deal, the liquefied natural gas that Bulgaria will buy on international markets will be unloaded and processed in Turkish LNG terminals and then transferred via the Botas gas network to Bulgaria.

The deal foresees up to 1.5 billion cubic meters of natural gas being transferred annually to Bulgaria from Türkiye.

Bulgaria has already signed a long-term contract with Azerbaijan for nearly 1 billion cubic meters of natural gas which it receives via Türkiye's gas network.

The rest of Bulgaria's needs, which are slightly more than 3 billion cubic meters per year, is covered through LNG imports from Greece.