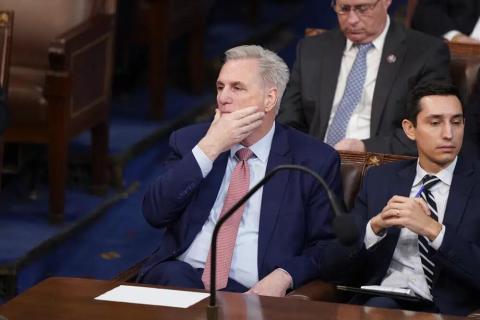 The new US Congress was plunged into disarray Tuesday as renegade right-wing Republicans blocked favorite Kevin McCarthy from becoming speaker of the House of Representatives in a series of humiliating votes seen as a rebuke to the party establishment.

California congressman needed a simple majority to be elected as Washington's top legislator, who presides over House business and is second in line to the presidency.But for the first time in a century, Republicans failed to elect a speaker in a nail-biting first three rounds of voting -- given blanket coverage across US television networks.

Rather than celebrating their new control of the House, the party instead faces a drawn-out fight to elect a speaker that could further deepen internal divisions -- and put McCarthy's political career on the line.

The 57-year-old needed 218 votes in the lower chamber, which flipped to a narrow 222-212 Republican majority after last year's midterm elections.

But he failed to bring into line the party rebels, including several high-profile allies of former president Donald Trump, and he was shocked by 19 "no" votes from his own side in each of the first two rounds, rising to 20 in the third.

His performance was so weak that he lost out to the Democratic minority leader Hakeem Jeffries in each of the opening three ballots -- although there remains little doubt a Republican will ultimately claim the speaker's gavel.

McCarthy has long coveted the role, having withdrawn from the race in 2015 amid a number of blunders and a right-wing revolt.- 'The next steps' -This time he was once again tripped up by far-right rebels, despite bowing to their calls to push aggressive investigations of Democrats including President Joe Biden after taking over...