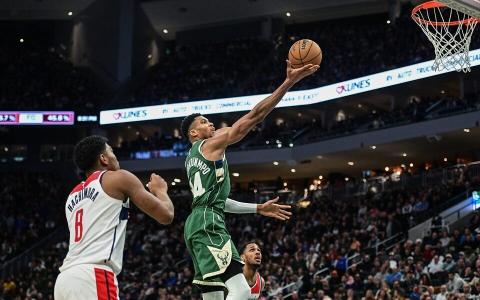 The two-time MVP's fourth career 50-plus-point game came on 20-of-33 shooting from the floor and 15-of-16 at the free-throw line. Coming into the contest, Antetokounmpo and teammate Bobby Portis were tied for third-most double-doubles in the NBA with 21 each. Portis kept pace with his fellow Buck, coming off the bench for 17 points and 13 rebounds.

Kristaps Porzingis led the Wizards with 22 points, and he grabbed nine rebounds. Kyle Kuzma added 20 points, and Daniel Gafford had 11 points and 12 boards. Bradley Beal scored eight points in 13:18 before his night ended in the second quarter due to a hamstring injury.

The Wizards fell behind late in the first quarter and were left playing...