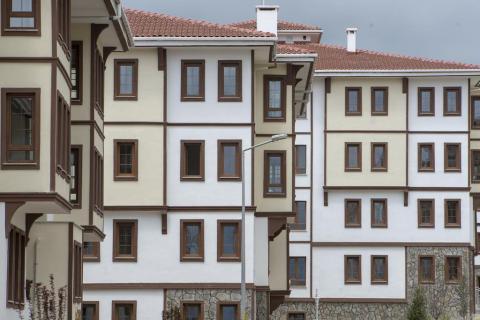 The government is preparing to unveil the details of a housing project for middle-income groups.

The project will be announced on Jan. 4 at a press event in Ankara to be attended by Treasury and Finance Minister Nureddin Nebati and Environment Minister Murat Kurum, according to the statement from the Environment and Climate Change Ministry.

The key pillar of the project will be the housing loans to be offered to middle-income groups at affordable costs.

The two ministries have been working jointly on the loan package.
Under the new campaign targeting the middle-income group, around 100,000 houses will be built in the country's all 81 provinces.

Loans are expected to be offered at different rates depending on income with a maturity of up to 15 years with a grace period.

Monthly interest rates on the loans are likely to be below 1 percent, while first-time home buyers will be able to benefit from lower interest rates.
Certain conditions will be set to determine who will be eligible borrowers in order to offer the loans to those who really need to buy a house and not those who want to buy a second or third property as an investment.
One of the conditions will be income level.

Last year, the government launched a major social housing project to build tens of thousands of homes for low-income groups. Some 5 million people applied to buy a house from the social housing project under which 500,000 homes will be developed between 2023 and 2028.
The government is initiating those projects to bring the skyrocketing home prices and rents under control by increasing the supply in the market.

Residential property prices increased by 188 percent in October 2022 from a year ago, recent data from the Central Bank...