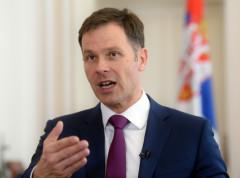 BELGRADE - Serbia's 2019-2022 cumulative GDP growth was 13.7 pct, one of the highest in Europe, Finance Minister Sinisa Mali said on Wednesday in a reaction to recent reports by some media that have compared Serbia's 2022 GDP growth to that of other countries in the region.

That means that the Serbian economy grew at a higher rate than all those economies in the toughest period of the crisis, he noted.

"If Germany, one of the strongest European economies, registers real GDP growth of 1.9 pct in 2022, it is...

Vucic: KFOR has given negative response to request for return of Serbian troops