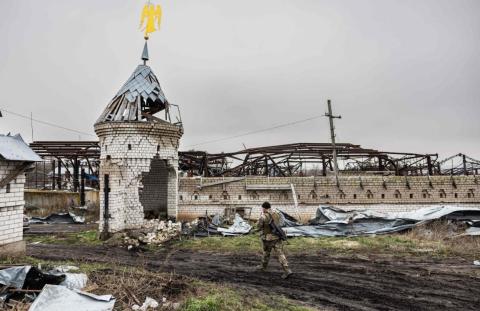 The toll from a Ukrainian New Year strike in Makiivka has risen to 89, Moscow said Wednesday, after Russians gathered to mourn the troops in a rare public display of anger and grief.

Russia said in the early hours of Wednesday that more bodies had been found under the rubble in the town of Makiivka in the Russian-controlled region of Donetsk and the toll had risen to 89.

The defence ministry declared that the tragedy had taken place because Russian troops had used cell phones, giving away their location to Ukrainian forces.

Russia said on Monday that 63 troops had been killed, the biggest loss of life from a single strike reported by Moscow since the start of the offensive in February."

The number of our dead comrades has gone up to 89," Lieutenant General Sergei Sevryukov said in a video statement released by the defence ministry early Wednesday.

More bodies had been found under the rubble, he added. Ukraine struck a temporary base in Makiivka at 12:01 am local time on January 1, using US-supplied HIMARS rocket systems, Sevryukov said.

Russian President Vladimir Putin had just delivered his traditional New Year's address. The Kremlin chief hailed "our heroes" fighting in Ukraine and declared that "historical rightness is on our side."

Ukraine has taken responsibility for the strike and said the toll could be much higher. Russian war correspondents said many of the victims were reservists recently mobilised into the army.

The admission of the heavy losses came after the war correspondents, who have gained influence in recent months, accused Russia's top commanders of fatal incompetence.

Sevryukov said Wednesday that it was the use of cellphones by soldiers that had led to the deadly strike."