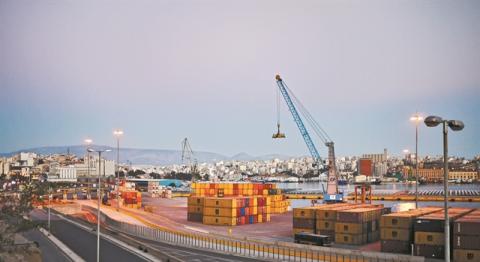 Looking at the direct connectivity based on the monthly calls of different ports before and after the ships call to the port of Piraeus and Thessaloniki in 2021, some particularly interesting conclusions emerge, among which the largest number of calls to both major Greek ports originate from, or have as a destination the port of a neighboring country, a fact that also shows the connection between Greek and Turkish ports.

In particular, the country's largest port, Piraeus, connects monthly directly with 73 different ports, from 31 different countries, two more countries than in 2020. 16 countries were European, 9 Asian, 5 African, and one on the other side of the Atlantic. 28% of the calls had an origin or destination in a Turkish port, while Italy ranked second with 14% of the calls. 6% of the monthly approaches came from or had as a next destination in a Greek port.

Egypt and Singapore are included in the top five (6% of approaches). Piraeus is directly connected to some of the main ports - hubs in the global transport networks.

In particular, it is connected (origin - destination) with Singapore with 25 routes per month, Port Klang (Malaysia) with four connections and with the European ports of Rotterdam and Antwerp with 16 and 13 monthly connections respectively. The port with which it maintains more connections is that of Izmir, followed by Singapore, Limassol, Thessaloniki and...