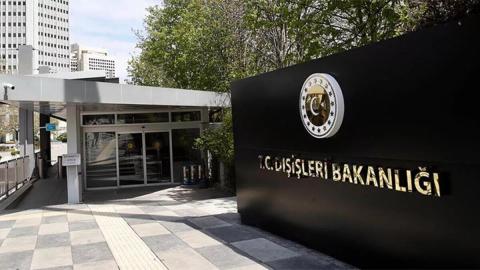 Foreign Minister Mevlüt Çavuşoğlu held a phone conversation with the minister of Foreign Affairs and International Cooperation of the United Arab Emirates, Sheikh Abdullah bin Zayed Al Nahyan, on Jan. 3 and discussed the latest developments in Afghanistan and the raid on Al-Aqsa Mosque.

The two ministers reiterated their condemnation of an Israeli Minister's raid on Al-Aqsa Mosque and underlined the importance of preserving the status and sanctity of religious sites in Jerusalem and increasing coordination against such unacceptable acts.

Emphasizing the need to put the Al-Aqsa Mosque under full protection and to stop the serious and provocative violations taking place there, the ministers called on the Israeli authorities to assume their responsibilities to reduce escalation and instability in the region.

During the phone conversation, they also discussed the Taliban's current ban on women's access to university education and their shared concerns about their exclusion from national and international civil society and humanitarian organizations.

Çavuşoğlu reiterated Türkiye's expectation that the said decision would be reversed and underlined the importance of coordinated efforts, particularly the Organization of Islamic Cooperation (OIC), in this regard.

Al Nahyan stressed that the decision and previous bans on girls' access to secondary education violate basic human rights. He pointed out that Islam attaches great importance to women, gives them a privileged position and protects their rights. He also stressed the need to ensure women's rights and the importance of full and equal participation of women and girls in all aspects of life.

Meanwhile, the Turkish Foreign Ministry on Jan. 3 condemned the "provocative act" by...