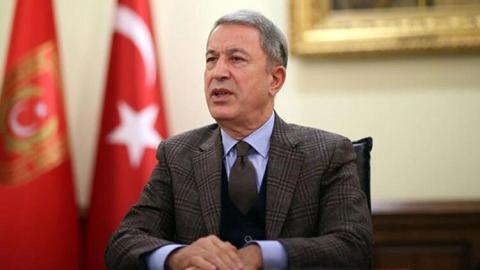 Türkiye and Russia will resume joint patrols in northern Syria in line with a recent deal between the two countries, the Turkish defense minister has said, expressing Ankara's intention to continue a process started by Ankara, Moscow and Damascus for resolving terror and migration problems.

"Necessary agreements were reached [between Türkiye and Russia]. This process will continue with the establishment of joint centers, resumption of joint patrols and meeting of experts. Our wish is that this process continues in a reasonable, logical and successful manner," Defense Minister Hulusi Akar told reporters at the parliament on Jan. 4.

Türkiye has always been respectful to the sovereign rights and borders of its neighbors, Akar said, underlining that its sole purpose is to protect its citizens and borders against the terrorists.

"Our wish is to fight terror successfully. That's what we want to do," he said. Türkiye and Russia had agreed to run joint patrols in northern Syria in line with a 2019-dated protocol. Akar's statement informs that they will be resumed and controlled through a joint center.

Türkiye's other objective is the return of Syrian migrants it has been hosting in the last decade to their homeland. "Our wish is the return of our Syrian brothers to their county in a voluntary, safe and dignified way. On the other hand, is the U.N. Security Council resolution 2254. We have always supported the implementation of this in a holistic and...