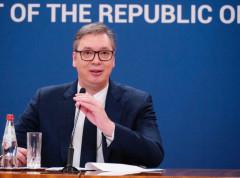 BELGRADE - At an annual press conference, Serbian President Aleksandar Vucic said he was satisfied with Serbia's achievements in 2022 as the country had succeeded in maintaining financial stability and the national economy, achieving GDP growth of 2.3-2.5 pct despite the global crisis.

"In the past three years, we managed to become one of the top three countries in terms of cumulative growth rate," he said, adding that Serbia was also one of Europe's top five performers when it comes to the debt-to-GDP ratio.

"That is a huge success for Serbia since the public debt ratio was at 79 pct when I became PM, while now it is at 55 pct," Vucic said in the Palace of Serbia, wishing a happy New Year to all citizens and a merry Christmas to Orthodox believers.

"Let me say a big thank you for your understanding for everything that was going on last year, for your support,...

Brnabic: FTA with UAE to be signed within three months

Brnabic: We will request additional guarantees for Kosovo-Metohija Serbs

Vucic: KFOR has given negative response to request for return of Serbian troops

Djuric: Kurti has no carte blanche support from US

Brnabic: FTA with UAE to be signed within three months

Vucic: Republika Srpska must remain foundation of stability despite challenges

Brnabic: We will request additional guarantees for Kosovo-Metohija Serbs