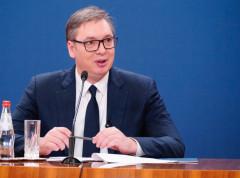 BELGRADE - Serbian President Aleksandar Vucic said on Wednesday tough challenges were ahead of Serbia regarding the Kosovo-Metohija issue, and noted that a further nine countries had derecognised the so-called Kosovo.

At an annual press conference at the Palace of Serbia, Vucic said that as many as 106 countries did not recognise the so-called Kosovo as independent and that 84 countries unequivocally recognised it, while the position of three countries on the matter was "unclear."

"We have nine that have withdrawn their recognitions - Somalia, Burkina Faso, Gabon, Eswatini, Libya, Guinea, Antigua and Barbuda, Maldives, Saint Lucia - we are waiting for a tenth one," he said.

Tough challenges are ahead regarding the Kosovo-Metohija issue and peace and stability have barely been preserved, Vucic said, noting that Belgrade had provoked no one.