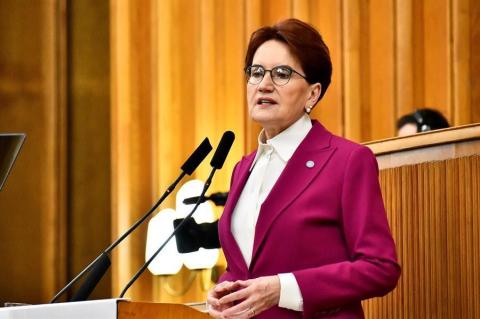 "How is it possible to receive a pension below the minimum wage? Raise the lowest pension to the minimum wage as soon as possible. Come on, Mr, Erdoğan. Let's hear this voice and see," Akşener said, addressing her party members at the parliament.

The wages of 60 percent of the workers in Türkiye will be below the poverty line, she said referring to the high inflation rate in the country.

"Mr. Erdoğan will condemn our nation to starvation. The lie that 'we did not crush the minimum wage [workers] with inflation' will emerge as daylight. Growing numbers mean nothing. The key is to bring inflation down," Akşener stated.

The important thing is to increase the purchasing power of the people, she emphasized.

Akşener also welcomed the decision of eliminating a retirement age requirement that would allow more than 2 million Turkish workers to retire immediately and said her party will give support at the parliamentary ratification process.

The government had to take the step upon the growing pressure of the citizens that were asking for early retirement rights, she said. "We will do our best to get this law passed by the parliament as soon as possible, and we will crown the right you have taken with the law."