A crime ring that had been stealing electricity over the last seven months in various parts of the country was unraveled on Friday, according to authorities who said that six men were arrested.

Two men were arrested on Friday for a series of burglaries that targeted churches in Hania, Rethymno and Iraklio on the island of Crete.

Police said the two suspects, aged 33 and 36, carried out 28 burglaries over a period of three months, removing church items and offerings worth more than 30,000 euros.

Greek Prime Minister Alexis Tsipras announced the government is freezing a planned VAT hike in five islands of the northeastern Aegean that have borne the brunt of the refugee crisis, saying it is "a very positive development."

The freeze will affect the islands of Lesvos, Chios, Samos, Kos and Leros, which were due to adopt in July the higher tax rates implemented on the mainland.

US senators are turning up the pressure over the F35 fighter jet sale to Turkey, with new restriction proposals that could possibly make the delivery of the stealth warplanes more difficult. 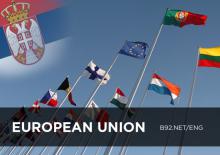 This was done by head of the Delegation of the European Union to Serbia Sem Fabrizi who on Friday met with Serbian Minister for European Integration Jadranka Joksimovic.

Turkish Foreign Minister Mevlüt Çavuşoğlu has said Ankara hopes a 3 billion-euro aid payment to Turkey by the European Union would be delivered without delay, after EU member states approved the second tranche of the payment during a summit in Brussels.

German Chancellor Angela Merkel defended the migration deal clinched at an EU summit on Friday, describing it as a decisive step in the direction of a common European asylum policy.

"What we achieved here together is perhaps more than I had expected," Merkel told reporters at the end of the summit.

The National Commission for Telecommunications and Post (EETT) convened on Thursday and, according to sources, has decided to issue its approval for the acquisition of Cyta telecom's Greek subsidiary by Vodafone.

This decision paves the way for the merger of the two Greek companies, thereby reducing the number of local market players from five to four.

Vivartia, Greece's biggest food group, has come to a definitive agreement with the country's four systemic banks on the restructuring of its debts, which amount to 373 million euros.

Retail sales were led higher by supermarkets and pharmaceuticals, the data showed.