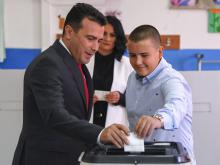 Macedonia's Prime Minister Zoran Zaev announced he will forge ahead with his bid to pass the 'name' agreement with Greece through parliament, despite his "yes" campaign failing to draw enough voters to pass the turnout threshold required to make Sunday's historic referendum legally valid.

An own goal sufficed for PAOK to record a precious 1-0 result at Olympiakos on Sunday, to go joint top of the Super League table with 13 points along with Atromitos. The Thessaloniki team extended its perfect record to five wins, but had started the season on minus two.

As a referendum on changing the name of the Former Yugoslav Republic of Macedonia attracted a low turnout on Sunday night, the prospects for the so-called Prespes deal between Athens and Skopje, and for the FYROM government, appeared unclear.

The bank stock slump has gone on for too long and valuations are now exceptionally low, say senior credit sector officials. However, analysts questioned on the issue by Kathimerini say the problems that Greek lenders are facing will not be overcome quickly, justifying the pounding the sector has sustained on the Athens stock exchange.

The Finance Ministry is planning to draw just 7 to 8 billion euros from international money markets through the issue of new bonds next year. This is because it intends to dip into the cash buffer for 2 billion euros in 2019 and 2.4 billion in 2020 in order to service the national debt.

The result of the referendum in the Former Yugoslav Republic of Macedonia will be disputed by the country's opposition, especially the nationalist VMRO-DPMNE, as participation was significantly lower than 50 percent of the approximately 1.8 million registered voters.

Greece is one of the Former Yugoslav Republic of Macedonia's most important trading partners, and the ratification of the Prespes agreement would both aid in the normalization of relations between the two Balkan neighbors and give Greece the opportunity to advance its status as the gateway to Eastern and Central Europe.

After voting finished in a name change referendum in the Former Yugoslav Republic of Macedonia (FYROM), Prime Minister Zoran Zaev said that despite a "boycott" he expected that the majority voted "yes" and that the result should be reflected in Parliament.

More than 500,000 properties, mostly outside Greece's main cities, are undertaxed, as the state does not know exactly where they are due to its use of obsolete maps. Meanwhile there are thousands of errors in the E9 tax forms in which property assets are declared by owners. All this has led to revenue losses for the state that are estimated at 140-200 million euros per annum.

Greece's Defense Minister Panos Kammenos said in a tweet Sunday that the name change referendum in the Former Yugoslav Republic of Macedonia (FYROM) was "invalid" due to low turnout.

Turnout stood at 34 percent just before polls closed. Reports said supporters of a boycott were celebrating chanting "Macedonia" outside Parliament in Skopje, capital of FYROM.