Secretary of state with the Ministry of Foreign Affairs (MAE) George Ciamba on Friday had consultations in Vienna with the Secretary General of the Ministry for Europe, Integration and Foreign Affairs of the Republic of Austria, Johannes Peterlik, among other topics the two discussing collaboration in implementing and promoting the EU Strategy for the Danube Region.

Sofia. Bulgarians made 736.7 thousand trips abroad in August 2018, or an 8.3% increase YoY, according to data of the National Statistical Institute (NSI). 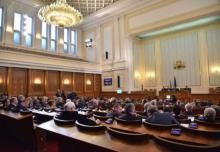 Sofia. The Parliament has passed today the Medicinal Products in Human Medicine Amendment Bill, restricting the export of medicines that are in short supply in Bulgaria, Focus News Agency reports.

The Hellenic Confederation of Commerce and Entrepreneurship (ESEE) informed the Labor Ministry on Friday that it is in favor of the gradual rise of the minimum wage to 751 euros per month in 2022, as well as the "rationalization" of social security contributions by freelance workers and the reduction of contributions for auxiliary social security by one percentage point.

The ruling was made ahead of a referendum on October 6 and 7 that seeks to ban same-sex marriage, Tanjug reported, citing AP.

The Romanian Constitution currently states that marriage is between spouses, while the referendum's goal is to change that definition to "between a man and a woman."

The Governing Council of the European Central Bank has named Greek central bank chief Yannis Stournaras as a member of the council's audit committee, replacing Erkki Liikanen, the Bank of Greece said on Friday.

Leaders from Turkey, Russia, Germany and France will come together at the first summit of its kind in a bid to extensively discuss recent developments in Syria, German Chancellor Angela Merkel has announced while hosting President Recep Tayyip Erdoğan in Berlin.

An inscription ordered by Ottoman Sultan Süleyman the Magnificent on a wall of the Bitlis fortress in eastern Turkey has been read and registered. Click through for the story in photos...

The official reserves of the Turkish Central Bank dropped to $88.9 billion as of Aug. 31, the bank announced on Sept. 28.