Consulate of Bulgaria to the Republic of Ghana has renewed its diplomatic ties after their temporal close down due to budgetary reasons and would be opened on November 1, 2018.

The United States has stated that no counterfeit visas produced at the fake U.S. embassy in Ghana, run by Ghanaian and Turkish organized crime rings for a decade, was used to enter the country.

Authorities in Ghana busted a fake U.S. embassy in the capital Accra run by a criminal network that for a decade issued illegally obtained authentic visas, the U.S. State Department said.

Turkey stands ready to help fight the growing threat of terrorism in West Africa under a new strategic partnership that aims to boost trade and other ties with the continent, President Recep Tayyip Erdo?an said on March 2.

At least 96 people died as a fire broke out and engulfed a petrol station in Ghana's capital Accra on Thursday.

The fire erupted as the city is dealing with the consequences of two days of heavy rain, which left many people homeless and without electricity.

At least 78 people lost their lives in an explosion in Accra, the capital of Ghana, at a gas station.

Most of the people at the gas station were taking shelter from the torrential rain. The explosion has been judged to have been an accident, so far.

At least 90 people were killed in a fire at a petrol station in Ghana's capital, Accra, as they sought shelter from heavy rains that caused widespread flooding, emergency services said June 4.   The fire broke out at the filling station in the Kwame Nkrumah Circle area of the city late on June 3 night and is thought to have spread from a nearby residence. 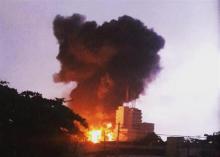 An explosion at a gas station in Ghana's capital killed at least 78 people late on June 3, many of whom had sought shelter there from torrential rain, a fire brigade spokesman said.

The blast was caused by a fire that erupted in a nearby lorry terminal at around 10 p.m. (2200 GMT) then spread to the gas station and other buildings in Accra, Prince Billy Anaglate told JOYFM radio. 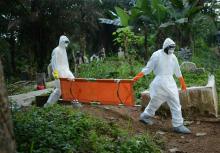 Ebola-hit nations met for crisis talks on Thursday as the death toll topped 1,500 and the World Health Organization warned that the number of cases could exceed 20,000 before the outbreak is stemmed.