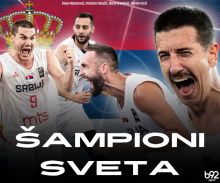 The national team of Serbia in 3×3 basketball won a gold medal tonight at the World Championship in Antwerp, as they were better than Lithuania in the final with 21:16.
Serbia managed to win the fifth gold at seven planetary shows, and it also has one silver and one fourth place.
Our team achieved seven victories from the same number of matches in this competition.

And officially the port of Valencia (Port Authority of Valencia-PAV) in 2021, was in fourth place in Europe in container traffic behind Rotterdam, Antwerp, and Hamburg, and in front of Piraeus which remains fifth, as reported in a relevant announcement of the Spanish port.

The first three half goals have helped Fenerbahçe secure an easy 3-0 win against Antwerp in the fourth match of the UEFA Europa League as the Yellow Canaries' captain targeted the president of the Greek team Olympiacos.
The Istanbul giant will meet next on Nov. 25.

Fenerbahçe has been grabbed by troubles early in the season and will play a crucial game on Oct. 30 when it visits Konyaspor in the Turkish Süper Lig.

A solid start to the season, with six wins in its first eight league games, had carried the Istanbul club to the top of the standings, but troubles began when Fenerbahçe lost 3-1 at Trabzonspor on Oct. 17.

Turkish side Fenerbahçe were held to a 2-2 draw by Antwerp on Oct. 21 in a Group D match of the Europa League.

Mbwana Samatta found an early goal for Antwerp in minute two at the Şükrü Saraçoğlu Stadium in Istanbul.

Fenerbahçe leveled the game with a goal by Enner Valencia in the 21st minute, but Valencia later missed a penalty shot in minute 37.

Two Turkish clubs in the Europa League, Fenebhaçe and Galatasaray, will be on the pitch on Oct. 21 with different targets.

Fenerbahçe will aim for its first European win of the season when it hosts Antwerp, while Galatasaray hopes to extend its stay atop its group in an away game at Lokomotiv Moscow.

Over half a ton of cocaine was discovered in banana boxes in a fruit and vegetable warehouse in Chiajna locality, Ilfov County, the market value of the drugs being around 25 million euro.