A show adapted for the stage from Miguel de Cervantes' immortal piece "Don Quixote" will meet with the audience on Oct. 16 at Istanbul's Cemal Reşit Rey (CRR) Concert Hall with the performance by Spanish José Huertas Flamenco Ensemble.

Describing Don Quixote's emotional world with music and costumes reflecting Spanish folklore, the show will be staged for the first time in Turkey.

Art enthusiasts of Contemporary Istanbul are crowding around "Agua Verde" to take a picture of the oil painting of a woman on a carpet which "touches on the culture here". 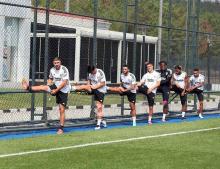 A depleted Beşiktaş squad will be in Amsterdam on Sept. 28 when the Turkish champion plays Ajax in a Champions League Group C match.

Barcelona purchased Emre Demir from Turkey's Yukatel Kayserispor for €2 million ($2.34 million) plus bonuses, the Catalan club said in a statement on Sept. 23.

Turkey's on-demand delivery pioneer Getir announced on Sept. 15 it has launched in the Spanish cities of Madrid and Barcelona.

In a statement, Getir said the move comes after acquiring BLOK, a similar rapid delivery service from Spain.

Ljubljana – The acquisition of the food delivery platform Ehrana is now finalised and all activities have been transferred to Glovo, the Spanish acquirer said. Glovo had announced in May that it would take over one of the largest home delivery providers in Slovenia, and the deal has now been completed.

The Netherlands tore apart Turkey 6-1 in a 2022 FIFA World Cup qualifying match on Sept. 7, moving to the top of Group G.

The home team scored the opener very early in the match to shock Turkey at Johan Cruijff ArenA in Amsterdam.

Romania's multiple Olympic canoeing medallist Ivan Patzaichin has died at the age of 71, the Romanian Olympic Committee (COSR) announced on its Facebook page on Sunday. "He's a legend ... a champion has turned into a star. Ivan Patzaichin has left us. His story is the story of success, common sense and fine character.