Namely, the long-term political stability of Germany under Angela Merkel, who as an unofficial European leader helped manage a series of political and economic crises on the continent, is over, and after the elections it seems that a weak and compromise coalition will be formed. 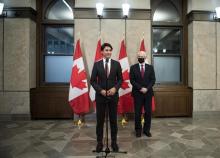 Two Canadians detained in China on spying charges were released from prison and flown out of the country on Sept. 24, Prime Minister Justin Trudeau said, just after a top executive of Chinese communications giant Huawei Technologies reached a deal with the U.S. Justice Department over fraud charges and flew to China.

It was Beijing's response to the sanctions it imposed on British lawmakers who spoke about human rights violations in China's Xinjiang province.
Speaker of the House of Commons, Lindsay Hoyle, and Speaker of the House of Lords, John McFall, prevented the Chinese Ambassador from speaking in the British Parliament today, Reuters reports.

The sanitary regulator of Brazil suspended the use of just over 12.1 million doses of the coronavirus vaccine manufactured by the Chinese company Sinovac after knowing that the vials containing the vaccines were filled on an unauthorized production base.

"It is with great sadness that I received the news of the death of Jan Hecker, German ambassador to PR China. His skill set and understanding of the region marked the relations between our two countries", Vucic posted on Twitter.

Brnik – The Paralympic Games in Tokyo, which ended on Sunday night with a ceremony at the Olympic Stadium, were generally a success for the Slovenian Paralympic team. Shooter Franček Gorazd Tiršek won a silver and a bronze medal, while the younger members of the team gained valuable experience.