German Chancellor Angela Merkel said on Monday allegations that a German man worked as a double agent for U.S. intelligence were serious and, if true, were a clear contradiction of what cooperation between partners is supposed to be about.

German Chancellor Angela Merkel arrived in China on Sunday for her seventh visit since 2005, with economic ties topping the agenda and a high-powered business delegation in tow.

Merkel touched down early Sunday in the southwestern city of Chengdu, where she met local officials, visited a market and toured a factory operated by German car manufacturer Volkswagen.

The worldâs giant economic power, China is aiming at deepening its ties and increasing its influence in Central Asia through a new project called the âSilk Road Economic Belt and 21st Century Maritime Silk Road,â an initiative stretching from Europe to Asia.

âThe oppositions in Hong Kong should understand and accept that Hong Kong is not an independent country. They should not think that they have the ability to turn Hong Kong into Ukraine or Thailand,â warned the Global Times, the most aggressively nationalistic of Chinaâs state-run newspapers.

China's ruling Communist party is officially atheist, and for years has restricted fasting in Xinjiang, home to the mostly Muslim Uighur minority. 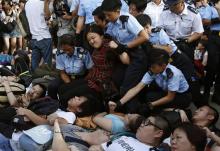 Investigators looking into the disappearance of the Malaysia Airlines plane are confident the jet was on autopilot when it crashed in a remote stretch of the Indian Ocean, Australian officials said June 26 as they announced the latest shift in the search for the doomed airliner.

Prime Minister Antonis Samaras and Chinese Premier Li Keqiang on Friday issued a joint statement pledging to boost strategic bilateral ties following a visit by the two men to Piraeus, where Chinese shipping giant Cosco is seeking to expand its presence and which Li said could become Chinas gateway to Europe.

More than 160,000 people took part in an unofficial Hong Kong vote on electoral reform Friday, at a time of heightened tensions as pro-democracy activists worry that Beijing will backtrack on its promise of universal suffrage.

On a visit on Friday to the port of Piraeus, where Chinese shipping giant Cosco controls two cargo terminals, Chinese Premier Li Keqiang expressed Beijing's interest in investing in Greece's railway network in order to accelerate the transport of goods to Europe.