Zuzka's father is a priest within the Greek Catholic church, the third largest religious denomination in Slovakia, where some 66 per cent of people identify as Catholics.

Raised in a house full of icons, old books and religious symbols, Zuzka says she has never turned away from God or her Catholic faith, despite the Church's disdain for homosexuality.

"As soon as I took the position, this issue, especially the question of the rainbow flag, came up," said Patakyova, who defied political pressure and kept the flag flying. She also became a prominent supporter of Bratislava's annual Pride march.

Slovakia is one of only six EU countries that do not allow legal partnerships or adoption of children by same-sex couples.

But in an increasingly fractious Europe, officials from Visegrad Four (V4) states in Central Europe — Czech Republic, Hungary, Poland and Slovakia — say they will champion the cause of EU enlargement within the new Commission.

For many Slovaks, the texts are a reminder of the sheer depth of corruption in a country still reeling from the shooting of 27-year-old Kuciak and his fiancée in Bratislava in February 2018.

They see the texts as proof that Kocner, who was already in custody when he was charged with ordering Kuciak's murder, thought he was above the law, though he denies any wrongdoing.

In recent European Parliament elections, 16 per cent of voters in the Hlohovec district backed the People's Party Our Slovakia (LSNS), widely seen as neo-fascist. In one of the town's electoral districts, support for the party topped 30 per cent. 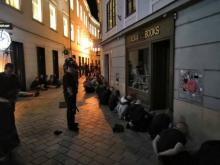 Specifically for "Horizont", the Ambassador of the Republic of Bulgaria to Slovakia Yordanka Chobanova commented the incident with FC Levski fans, who fought with fans of the Dutch Ajax and Polish Krakow in the centre of Bratislava on Wednesday night. 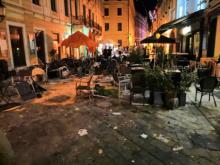 Supporters of the Bulgarian "Levski" participated in a serious fight in the center of the Slovak capital Bratislava against fans of Krakowia and Ajax Amsterdam.

The "Blue" supporters sat in the center of the city, after which the Vandalism took place in Bratislava. The video on a popular Instagram profile shows how to start strolling from the cafes, as well as crashing windows.

In one camp are those who take the battle to the streets, organising noisy protests and engaging in direct action. This is the traditional "Antifa" model favoured by more militant campaigners.

Sofia lost the race for the seat of the European Labor Authority. The new EU agency will be located in Bratislava, EUobserver reported. Slovakia received 15 out of 28 votes during the vote in the ministerial meeting of the Council on Employment, Social Policy, Health and Consumer Affairs.