Canberra – Slovenia and Australia will start negotiations to conclude an agreement on avoidance of double taxation next year, the Slovenian Embassy in Canberra has announced.

Announcing the negotiations, the embassy said on Wednesday that such an agreement would have a positive influence on the volume of economic cooperation between the countries, especially in investments.

He stated that this is shown by the unilateral decisions of Washington to withdraw from Afghanistan and the U.S. security pact with Australia and Great Britain.

The security pact between Australia, Britain and the United States puts the deal under serious question

The United States and Britain sought on Sept. 19 to smooth tensions with Paris over a new security pact with Australia, with U.S. President Joe Biden requesting early talks with his French counterpart Emmanuel Macron.

Australian Prime Minister Scott Morrison on Sept. 19 rejected France's accusations Canberra lied about plans to cancel a contract to buy French submarines, saying he had raised concerns over the deal "some months ago".

Australian police arrested 235 people in Melbourne and 32 in Sydney on Saturday, at illegal rallies against quarantine and "measures" imposed due to the coronavirus pandemic, while several police officers were injured in clashes with protesters.
Victoria State Police said six police officers were hospitalized. 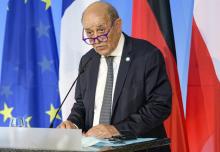 France has recalled its ambassadors to the U.S. and Australia for consultation, Foreign Minister Jean-Yves Le Drian announced on Sept. 17, after Canberra ditched a deal to buy French submarines in favor of U.S. vessels.