In a statement, the organizers said the international jury board of the contest will host seven members, with Turkey's celebrated filmmaker Nuri Bilge Ceylan presiding over the jury.

Turkey's International Migration Film Festival on June 8 announced the entries that will compete in the feature films category.

In a statement, the organizers said eight films will be vying in the category during the festival, which will be held online from June 14-21.

If anyone had suggested a close collaboration between the two highly competitive Cannes and Venice films festivals this time last year, they probably would have been laughed out of the room.

Corfu was the European holiday destination with the biggest decline in revenues from Airbnb per unit last year, according to alternative accommodation monitoring platform AirDNA, showing how fragile the short-term rental market is. 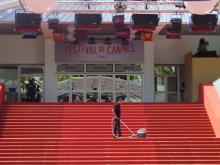 The event can take place in late June or early July, AFP reported.

The Cannes Film Festival will not be held as usual in May due to the spread of the coronavirus in France.

The event can be rescheduled at the end of June or early July. This is said in a statement released by the festival organizers.

Diversity, politics and revelations from the Nazi era will dominate the agenda as the Berlin film festival launches its 70th edition in the heart of the German capital on Feb. 21.

U.S. director Spike Lee has been named president of the jury for the 2020 Cannes Film Festival, organizers said on Jan. 14.

The 62-year-old filmmaker, who succeeds Mexican director Alejandro Gonzalez Inarritu, will head the panel that will award the 73rd Palme d'Or prize.

The film "Marie, Queen of Romania" by Alexis Sweet Cahill received the public choice award on Sunday, at the end of the tenth edition of the Les Films de Cannes a Bucarest festival, as part of a closing gala hosted by Cinema Pro in Bucharest, according to organisers. The award was handed to producer Gabi Antal, who announced that the film will open in theatres on November 8.