Cyprus wants to start talks with the European Central Bank on a debt swap that would ease the burden on the countrys largest lender, two people familiar with the discussions said.

TRAGEDY: Hatred of a Young Croat Made to Families to Mourn A Teenager Murdered his Sister’s Boyfriend just Because he was a Serb


Mirko Marković (23) was killed in Germany by Dominik (17), Brother of Daniela S. (18), his girlfriend he was planning to marry. The murder happened before Daniela’s prom, where Marko was to be her date.

FRANKFURT/BELGRADE - President of the European Central Bank (ECB) Mario Draghi and National Bank of Serbia (NBS) Governor Jorgovanka Tabakovic signed in Frankfurt on Tuesday a cooperation agreement on preventing and detecting counterfeit euros in Serbia, the NBS has stated.

BELGRADE - Indian Ambassador in Serbia Narinder Chauhan announced the opening of India Serbia Photography Contest 2014 at the EXIT festival in Novi Sad on Friday, the Indian Embassy in Belgrade released.

FRANKFURT, Germany  The president of the European Central Bank, Mario Draghi, said Wednesday that countries in the eurozone should be compelled to take steps to improve the performance of their economies in the same way that they are already required to observe rules on government spending. 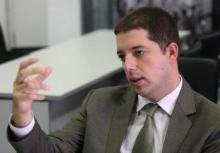 "Invasion of Serb property to be resolved"


FRANKFURT -- Activities of Kosovo's privatization agency undermine the foundations upon which the Serb community in the province is built, says Marko Đurić.

The director of the Serbian Government Office for Kosovo and Metohija spoke for the Serbian-language daily Vesti, published in Frankfurt, Germany.

FRANKFURT - Activities of Kosovo's privatization agency undermine the foundations upon which the Serb community in the province is built, Director of the Serbian government's Office for Kosovo-Metohija (KiM) Marko Djuric said Friday.

After the European Central Banks June meeting sparked the biggest monthly gain in the regions government bonds since January, investors are cooling on the debt, betting officials will refrain from more action on Thursday.

The euro-area inflation rate held steady in June at less than half the European Central Banks target, underscoring the challenge faced by Mario Draghi as he tries to stoke prices and ignite growth.