Lausanne – Top seed Tamara Zidanšek, the French Open semi-finalist, won the WTA Lousanne Open in Switzerland on Sunday beating France’s Clara Burel in the finals after a good two hours with 4:6, 7:6 (5) and 6:1 for what is her first-ever WTA tournament victory.

The house was in a sprawl of cinder-block shanties on the eastern edge of the town. Two Greek flags hung near the approach. Beyond them lay the Muslim cemetery. The women served coffee, accompanied by the usual jokes about whether to call it Greek or Turkish. The correct term, of course, depended on where you happened to be.

When Turkish ministers visit Thrace, there are always concerns about references to a Turkish minority in the region, even though the Lausanne Treaty defines the minority as a religious one. 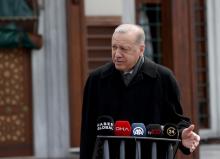 President Recep Tayyip Erdoğan said on April 16 that Turkey disapproves of the rhetoric expressed by Greek Foreign Minister Nikos Dendias at a joint press conference with Foreign Minister Mevlüt Çavuşoğlu and emphasized that Ankara instead wants a "harmonization period" with its neighbor.

The declaration of the 104 retired admirals supporting the Montreux Convention is a "black stain" on Turkey's history of democracy, Nationalist Movement Party (MHP) leader Devlet Bahçeli said on April 6, calling on the authorities to remove their titles and abolish their pensions.

The Montreux Convention is a red line for Turkey that guarantees peace and stability in the Black Sea, the Nationalist Movement Party (MHP) leader said on April 6.

"First of all, I would like to say that Montreux Convention signed in 1936 is a component and inseparable part of the Treaty of Lausanne," Devlet Bahçeli told his party's parliamentary group in the capital Ankara.

Turkish Defense Minister Hulusi Akar has reiterated claims that Greece is in violation of international treaties by continuing to maintain troops on several islands of the eastern Aegean, adding that Greek military officials have even conducted "provocative" visits to these islands.