Elsie Slonim, the only civilian woman living in a buffer zone in the largest city of divided Cyprus, has died at the age of 104, according to a statement by Turkish Cypriot police authorities.

Having lived a life of adventures for more than a century, Slonim died from a respiratory failure at her house next to the Turkish military unit on the Dereboyu border in Nicosia.

Turkey and the Turkish Republic of Northern Cyprus on June 7 condemned the hanging of a Byzantine flag over a mosque in Greek Cyprus.

Turkey on June 1 condemned an attempt to burn down a mosque in Greek Cyprus.

Three Molotov cocktails were thrown at the Köprülü Hacı İbrahim Ağa Mosque in Limassol province of Greek Cyprus on June 1.

Molotov cocktails thrown at the entrance of the mosque were noticed early and put out.

By Friday morning, Cypriot police had managed to track down 14 of the churchgoers who had taken part in an illegal service at Ayios Georgios Spileon Monastery in Limassol's Erimi village on Thursday, which soon turned into a fiasco as participants had locked themselves in rooms upon the sight of the police while some managed to escape. 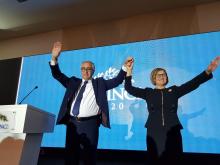 The current president of the Turkish Cyprus announced on Feb. 5 that he will contest the 2020 presidential election to be held on April 26.

Mustafa Akıncı told reporters in the capital Lefkoşa that he will run as an independent candidate.