The unprecedented decision means that EU countries will be asked whether there was increased risk of Poland violating core EU values.

Polish news agency PAP is reporting that the move that could result in sanctions against Poland, including stripping the country of its voting rights and freezing billions of euros from EU funds.

The EC has proposed to abolish Poland's voting rights in the EU Council because of the controversial judicial reform that was approved a few days ago, the news agencies reported.

Ludogorets faces European Grand Milan in the 1/16-final of the Europa League Cup. This became clear from the Nion draw today. At the first meeting, on February 15, 2018, the Bulgarian champion will host and the rematch is on 22 February at San Siro. Here are all matches: 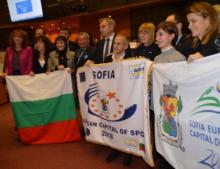 The city was officially declared the European Capital of Sport for 2018 at a ceremony in Brussels, Sofia Municipality said.

Olympiakos finished its Champions League group rock bottom with just one point after suffering its fifth defeat in six games, going down 2-0 at home to Juventus on Tuesday.

Olympiakos has definitively crashed out of Europe, with one game remaining in its group stage of the Champions League, after going down 3-1 at Sporting Lisbon on Wednesday for its fourth loss in five games.

The Reds have only one point, in one of their worst performances in a Champions League group stage ever, although they arguably entered one of the toughest groups.

Greek champions Olympiakos lost 3-1 to Sporting Lisbon in Portugal in their second last match in Group D, after conceding two late goals in the first half. Bas Dost (40’) and Bruno Cesar (43’) scored twice for the home side in the first half, with Bas Dost scoring a second (66’) and Olympiakos’s Vadis Odjidja-Otoe (86’) scoring a consolation goal.

Greek champions Olympiakos will play against Portuguese side Sporting Lisbon away from home in a last-ditch effort to clinch the third spot in Group D and advance to the Europa League. Sporting had defeated the Greek champs in the first round in Piraeus 3-2 in September. Currently, the Greek team is sitting at the bottom of the table with only 1 point and must defeat Sporting to reach them.

The European Court of Auditors (ECA) insists it had the right to look into the role of the European Central Bank in Greek bailouts, based on the Lisbon Treaty and a European Parliament resolution, and is now seeking ways to access the documents the ECB has refused to hand over.

Low-cost airline Wizz Air made the scale of its ambitions clear on Wednesday as it announced an order for 146 new Airbus planes, taking its total outstanding orders with the European aerospace company to 282.