A British-made documentary about pervasive gender-based violence in Turkey has been selected as the United Kingdom's Oscar nominee for the 94th Academy Awards, to be held in March in Los Angeles.

Directed by Chloe Fairweather, "Dying to Divorce" has been selected to represent Britain at the Oscars as the official entry in the Best International Feature Film category.

Leonardo DiCaprio said he signed up for Netflix's star-studded film about a comet threatening to wipe out life on Earth because it is an urgent analogy for the climate crisis. 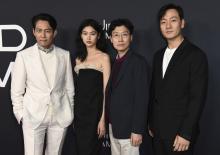 The creator of Netflix's "Squid Game" says the hit TV series will be back for a season two, even though most TV shows in South Korea run for just one season. Due to the show's global success, Hwang Dong-hyuk said, "I almost feel like you leave us no choice."

Turkey on Oct. 30 condemned the U.S. extradition of Hampig Sassounian, an Armenian origin who assassinated a Turkish diplomat in Los Angeles in 1982.

Turkey learned that Sassounian was "deported to a third country," said a statement by the Turkish Foreign Ministry.

The actor who played Gunther in the hit series "Friends" - James Michael Taylor - has died. He passed away at the age of 59 after a long battle with prostate cancer. He died at his home in Los Angeles on Sunday morning, reports the BBC.

The U.S. Coast Guard, heading a clean-up response involving federal, state and city agencies, said on Sunday there was an around-the-clock investigation into how the spill occurred.

Los Angeles is finally getting a museum for movies - and it's about time, said Tom Hanks, as he welcomed journalists to a special pre-opening event on Sept. 21.

The president of hospital doctors union EINAP, Matina Pagoni, announced the third dose of vaccination for everyone, speaking to the MEGA television.

"Of course we will undergo a third installment. We have been saying this for a long time. We are waiting for the Vaccines Committee, which are late in their suggestions ", noted Ms. Pagoni, saying that the issue will proceed in October.