Romanian businessman Dan Petrescu (68), his wife, his son and five of their friends died in a plane crash in Milan on Sunday afternoon, after the single-engine aircraft he was piloting crashed shortly after taking off.

Romanian billionaire Dan Petrescu, his wife, son and other five friends died on Sunday when their plane crashed near Milan, Italy, and burst into flames. The Pilatus PC-12 was being flown by Petrescu himself as the aircraft's owner.

Milan – Environment Minister Andrej Vizjak attended a three-day Pre-COP meeting in Milan whose participants tried to bring their positions closer together ahead of the COP26 summit in Glasgow. He noted the importance of an agreement being reached at the summit as the only way to limit heating of the atmosphere and negative impact of climate change.

The taxis and courtesy cars, street style and front row stars are back in Milan on Sept. 21 as fashion week returns with mostly live audiences for the first time in 18 months.

Milan – President Borut Pahor met Attilio Fontana, the president of Lombardy, in Milan on Monday for what his office said were talks about cooperation, in particularly economic ties, and opportunities to develop and enhance bilateral relations.

Police said that eight people are being investigated for inciting a crime.
A police statement said that searches were conducted in six Italian provinces, including Milan, Rome and Venice, and that eight people were under investigation as part of a group that calls itself "warriors" on the Telegram application, Reuters reports. 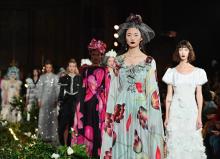 After a long hiatus due to the coronavirus pandemic, New York is opening its Spring/Summer 2022 Fashion Week with the return of in-person runway shows featuring big names like Tom Ford and Altuzarra.

But COVID-related curbs will deprive the series of some of its usual international flavor as it rolls out this week.

Milan – Slovenian designers will have 30 products exhibited at the Milan Design Week 2021, which starts today, presenting their view of how we will live in the future given the “inevitable apocalypse heralded by viruses and climate-related disasters”.