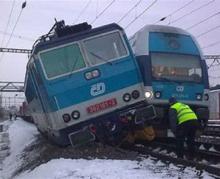 Two trains have collided near in Milavče village near the town of Domazlice, on the western border of Czechia. Local media reports that as many as 50 people are injured and rescue services are attending the scene.

Shortly after 8am (6am GMT) two trains collided in the village of Milavče, near Domazlice in Czechia's west, the country's police force said on Twitter.