A US Navy destroyer on June 11 crossed the Bosphorus and entered the Black Sea, Turkey's Anadolu state news agency reported, as tensions simmer around Ukraine.

The crossing by the USS Laboon was reported as U.S. President Joe Biden met Western leaders at the G7 summit in England.

The airspace over Geneva during the summit of Russian and U.S. leaders, scheduled for 16 June, may be closed for civil aviation, the spokesman for the Swiss Federal Department of Defence, Civil Protection and Sport said on Tuesday as Switzerland is preparing to monitor the airspace, Swiss media report. 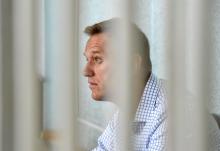 A court in Moscow on June 9 branded the political organizations of jailed Kremlin critic Alexei Navalny as "extremist" and barred them from working in Russia, a further blow to the embattled opposition ahead of parliamentary elections.

Russia and Turkey stressed the importance of resuming full-scale air traffic between the two countries, the Russian Foreign Ministry said on June 9.

A brown bear has been spotted on streets of Mytishchi, Moscow's residential suburb with a population of about 170,000, a source in the city's emergency services told TASS on Tuesday.

Russia has sent a complaint letter to the European football's governing body Uefa over what Moscow says is Ukraine's "political" Euro 2020 kit.

The Russian Football Union (RFS) argues that this "goes against the basic principles" of the Uefa.

The shirt, with a map showing Russian-annexed Crimea as part of Ukraine, earlier provoked anger in Moscow.

Russian President Vladimir Putin on June 4 set a tough tone for his upcoming summit with U.S. President Joe Biden, accusing Washington of trying to contain Russia and citing its response to the deadly Jan. 6 attack on the Capitol as a manifestation of the West's double standards.

Underscoring Turkey's contribution to NATO and the global fight against ISIL terror group, NATO general secretary said the alliance will continue to closely work with the country.