The Serbian tabloid Informer on Monday accused the US of trying to subvert Aleksandar Vucic, Serbia's likely future Prime Minister, by setting up a new regional TV station, N1.

BELGRADE - Momcilo Momo Kapor, one of the most famous Serbian writers, an author of cult books, a painter and journalist, was born in Sarajevo 77 years ago today.

What Mr. Baltakos did is an affront to Prime Minister Samaras and to the vast majority of the Greek people, said Harris, according to the AJCs website.

BELGRADE - The exhibition dubbed “Underground Images: School of Visual Arts Subway Posters, 1947 to the Present”, which was created for display in New York's huge subway, was opened at the Cultural Center of Belgrade on Thursday.

Ohad Naharin for Blic: I expect from audience to understand me


The more I am dealing with coreography, the more I enjoy

This is how Ohad Naharin described his job. His work 'Minus One' shall be presented by the Les Grands Ballets Canadiens at the 11th Belgrade Dance Festival. 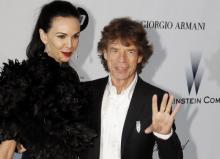 The Piraeus Group will likely launch its 500-million-euro bond issue on Monday, while bank officials who have been busy promoting the issue at events in London and New York are reporting major investor interest.

BELGRADE - Dimitrije Vasiljevic, a New York-based award-winning pianist and composer of Serbian nationality who is performing extensively in New York City jazz clubs, will have his debut at Carnegie Hall in March 2014.

At least four people were killed in the massive explosion and fire that leveled two buildings in Manhattan, New York, Wednesday.

The official cause of the blast has not been determined yet, however authorities consider a possible gas leak was to blame.