A team of students of the Grivita Technical High School of Bucharest has designed an independent car lifting system that would save drivers time and effort when replacing tyres because of a flat. The invention will represent Romania in the European final of the Skills for the Future competition this June in Prague, the Czech Republic.

NIS - The youth philharmonic Naisus has received an invitation to partake in the International Music Festival in Los Angeles from June 14-18, the philharmonic's management released in a statement.

Last year, the young musicians won a gold medal at a competition in Bratislava.

Czech President Milos Zeman has harshly criticized US Ambassador Andrew Schapiro after the latter commented on the head of state's decision to visit Russia on May 9.

Most European leaders have said they will boycot Victory Day celebrations in Moscow commemorating the 70th anniversary since World War Two ended in 1945.

PRAGUE -- Milos Zeman will attend Victory Day celebrations in Moscow in order to express "his gratitude for the fact Czechs are not forced to speak German today."

Russia will on May 9 organize a military parade to mark 70 years since World War II victory. 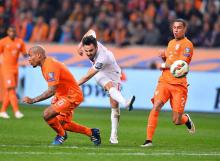 The Travelers' Choice Award-winning destinations sifted through millions of reviews of grand cities and exciting trip ideas to come up with a list of top 25 destinations for 2015.

1. Marrakech, Morocco
Reviewers pointed to the "magical place" with its markets, gardens, palaces and mosques.

VIENNA - Serbian Minister of Foreign Affairs and OSCE Chairperson-in-Office Ivica Dacic stated on Friday that water is an important subject for OSCE because it can be a cause of conflicts, just like cooperation on water-related matters can serve as a means for conflict prevention.

BELGRADE - The film Monument to Michael Jackson (Spomenik Majklu Dzeksonu), written and directed by Darko Lungulov, will be screened at four festivals - in Ireland, Prague, Switzerland and the United States - by the end of March.

A 25-year-old Bulgarian citizen, who had been charged with triple murder, was detained by Czech police in Prague's Radotin district.

An European Arrest Warrant had been issued for the man, who was sentenced to 16 years imprisonment for a triple murder.

The man, who had two accomplices, carried out the murders in a particularly cruel way, Prague Post reports.