The Romanian Order of Architects (OAR) calls on the Government to continue the procedure for inscribing the Rosia Montana site on the UNESCO World Heritage List.

There are no significant changes in the relations between Russia and the United States of America after the summit of the leaders of the two countries in Geneva, said the Russian ambassador to Washington, Anatoly Antonov.
But, he says - only ten days have passed. He added that the policy of U.S. pressuring Russia will continue.

A major war is currently impossible because of the nuclear parity, Kremlin's spokesman Dmitry Peskov said in an interview Thursday, answering a question on a potential world war with the use of nuclear weapons.

"Can a war happen? Putin said it clearly [during the Direct Line] that this is unlikely. We are being safeguarded by the nuclear parity," Peskov said.

As the deadline established by the Washington agreement for Serbia to move its Israel embassy from Tel Aviv to Jerusalem expired on Thursday, Serbia's head of state expressed uncertainty over the commitment.

The recent Russian-US summit in Geneva created opportunities for more productive work in the arms control domain, US Secretary of State Antony Blinken said in an interview with Italy's RAI TG1 on Tuesday. 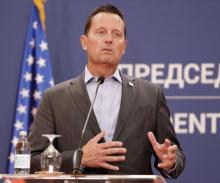 Grenell advised the former ambassador of the so-called Kosovo in the United States that it would be better for her to "extend a hand" than to "find insult in everything".
Grenell responded to the comment of the former Kosovo ambassador to Washington, Vlora itaku, on his Vidovdan greeting card, stating that "it must be exhausting finding an outrage in everything".

U.S. troops came under rocket fire in Syria on June 28, but escaped injury, in apparent retaliation for weekend U.S. air strikes against Iran-aligned militia in Syria and Iraq.

A U.S. military spokesman said U.S. forces had responded to the multiple rockets by firing back at the positions in self-defense.

President Joe Biden on June 25 promised Afghanistan's top leaders a "sustained" partnership even as he moves to accelerate winding down the United States' longest war amid escalating Taliban violence.

The US Department of Energy has finalized a feasibility report on the management of the disputed Ujman/ Gazivode lake in accordance with the 2020 Washington deal signed by former US President Donald Trump, separately, with Kosovo and Serbia, as part of the two countries' dialogue.

US President Joe Biden, at the time U.S. Vice President, addresses the Bosnian parliament during his visit to Sarajevo, 19 May 2009. EPA/STR