Different people may use different words to describe the friendly China-Greece relations. But recently, the word empathy came to my mind. As the great Greek philosopher Aristotle put it, "What is a friend?

The 8 tons of medical supplies provided by the Chinese government include 550,000 face and surgical masks, as well as madical goggles, gloves and shoe covers.

Chinese businesses and organizations contributed another 10 tons in medical supplies.

Air China will cancel flights to Athens, Greece, from Feb. 17 to March 18 as a precaution to stem the coronavirus outbreak, an Air China company official in Greece said on Wednesday.

"The reason is public safety because of the coronavirus and there are operational reasons as well," an officer at the airline's Athens office said.

An Air China jet made a rapid emergency descent after a co-pilot mistakenly turned off air-conditioning systems in a bid to conceal his e-cigarette smoke, Chinese media quoted the country's civil aviation authority as saying on July 13. 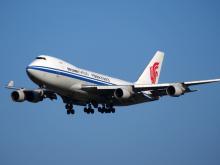 Air China has suspended flights to the DPRK due to "unideal operation," China's The Paper reported citing the airline's official.

Air China cancelled flights to the DPRK in April, but was soon resumed in May 5, with two flights scheduled a week. According to Air China, that time's suspension was caused by low customer demand, and so is this time.

Over the past 6 to 7 years the number of Chinese tourists to Greece has increased an impressive 10 times, reaching 150,000 from only 15-20,000, with the prospects looking even brighter over the next decade. The number of direct flights from Beijing to the international airport of Athens has substantially increased since Air China introduced direct flights at the end of September.

The first direct Air China flight between Athens and Beijing landed at Athens International Airport on Saturday morning. The Air China Airbus A330-200 had more than 200 passengers on board, including the Greek premier's wife.