In a statement released after Feb. 19's Monetary Policy Committee (MPC) meeting, the bank said the policy rate dropped to 10.75 percent from 11.25 percent.

A survey by Turkey's state-run Anadolu Agency had forecasted a change between 25 and 75 basis points.

Turkish police have detained a suspected former executioner for the ISIL in Syria, state-run Anadolu Agency reported on Feb. 17.

Security forces on Feb. 18 detained 50 suspected members of the FETÖ, the group behind the defeated coup attempt of 2016, state-run Anadolu Agency reported.

Turkey on Feb. 18 detained180 suspected members of the FETÖ, the group behind the defeated coup attempt of 2016, state-run Anadolu Agency reported.

Fifty of the detainees are part of a group of 71 FETÖ members who infiltrated the Justice Ministry sought by warrants in a 15-city operation ordered by prosecutors in the capital Ankara, Anadolu Agency cited sources as saying.

The Turkish central government budget balance saw a surplus of 21.5 billion Turkish Liras ($3.6 billion) in January, the Treasury and Finance Ministry has said.

In the same month of 2019, the central budget produced a surplus of 5.09 billion. 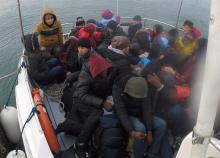 Turkish forces held 1,773 irregular migrants across the country in the past week, according to data compiled by Anadolu Agency.

Turkey has been the main route for irregular migrants trying to cross to Europe especially since 2011 when the Syrian civil war started.

Although all eight species of pangolins are banned from international trade, the "scaly anteater" population is still under deadly threats as they continue to be the world's most trafficked mammals. 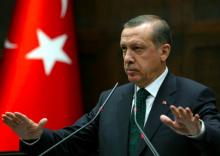 Prime Minister Imran Khan, along with cabinet members, welcomed the Turkish president, accompanied by a high-level delegation to PAF Base Nur Khan - a military base used for foreign government officials.

As tensions continue to rise in the last Syrian rebel bastion of Idlib, Russia and the United States are now battling, in Turkish, on an unprecedented turf: Twitter.

The U.S. Embassy in Ankara posted a video on its Twitter account with the caption "Eyes on Idlib."

The video's message voiced solidarity with Turkey and said the U.S. will "use its power for peace in Syria."

Arçelik, a leading white goods producer in Turkey, on Feb. 13 filed a case for patent infringement against South Korean appliances manufacturer LG Electronics and its subsidiaries in France and Germany.