FRANKFURT (Reuters) - Europe's next crisis could originate in the real estate market, European Central Bank supervisor Daniele Nouy said in an interview with a Latvian news agency, adding that banks are better prepared to handle one than they were a decade ago.

Relations with investors and the markets will be no easier for Athens than those with the country's creditors, European Central Bank Governing Council member Benoit Coeure warns in an interview with Kathimerini ahead of Greece's return to the markets.

The second-quarter financial results published by the National Bank of Greece (NBG) on Friday reflected the gradual strengthening of operating profits and of liquidity, and the achievement of the target for the reduction of nonperforming exposures for the entire 2018 already from the first half of the year.

Fourteen companies are now licensed by the Bank of Greece to operate in the domestic debt management sector, after the approval on Tuesday of applications from LPN Capital and Melfin. The intense interest seen over the past two years stems from the acceleration of sales to specialized companies of large portfolios of bad loans.

Fourteen companies are now licensed by the Bank of Greece to operate in the domestic debt management sector, after the approval on Tuesday of applications from LPN Capital and Melfin.

The intense interest in the sector over the past two years stems from the acceleration of sales of large portfolios of bad loans to specialized companies.

Representatives of the eurozone's finance ministers are expected in their next meeting on Thursday to prepare the ground so that profits made on the country's bonds by the European Central Bank (ECB) and euro area central banks during the economic crisis can be transferred to Greece, according to sources.

The Ifo institute index rose to 103.8 points from 101.7 in July. The result was better than the 101.8 expected by market analysts. 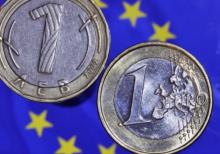 SOFIA (Reuters) - Bulgaria's government approved an action plan on Wednesday that envisages the country entering the "waiting room" for euro membership and also joining the European Union's banking union by the end of June next year.

Greece should have been given a debt haircut in 2010, not two years later, the former chief economist of the European Central Bank has said.

In an interview with German public radio Deutschlandfunk, Jürgen Stark, who resigned from the bank in early 2012, also criticized the ECB's approach in general to the euro crisis.