President Joe Biden said on July 16 that social media misinformation about Covid-19 and vaccinations is "killing people" and the White House said Facebook needs to clean up its act.

Chamber of Deputies Speaker and Liberal leader Ludovic Orban took today to Facebook to send a message on the National Day of France. "July 14, France's National Day, is a day of celebration for us too. The homeland of freedom and of a great civilization we have been in love with for centuries, France is the country that took in and hosted the Romanians since the beginning of the 19th century.

View on the Boka Bay from the Old Town of Kotor medieval walls. Photo: BIRN/Samir Kajosevic

US President Joe Biden's tax plan has been accepted by 130 countries worldwide including India and China. These nations will implement a global minimum corporate tax rate and duties on multinational giants from 2023, the Organization for Economic Cooperation and Development (OECD) said.

Over 50% of Romanians believe that they have been exposed over the last months to fake news or misinformation, and 52.6% consider that TV channels are the information channels most exposed to misinformation and the spread of fake news, according to a survey conducted by INSCOP. 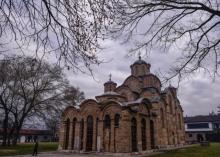 As Radio Television Gracanica reports, the case was reported to the police and the investigation is ongoing.
In the meantime, a photo of the flag appeared on social networks, where a masked person allegedly trampled on the stolen flag, holding the Albanian flag in his hands. The abbot of the monastery Visoki Decani, Sava Janjic also reacted to the mentioned picture.