Turkish Foreign Minister Mevlüt Çavuşoğlu on July 12 had a telephone conversation with his Greek counterpart, Nikos Dendias, over the treatment members of the Istanbul football giant Galatasaray were subject to by Greek authorities in Athens.

Brazilian central defender Marcos do Nascimento Teixeira (Marcao) on May 22 renewed his contract with Galatasaray until 2024, the Turkish football club announced.

In a statement, Galatasaray said Marcao, 24, signed a new deal to extend his stay until the end of the 2023-24 season.

Beşiktaş seized the Turkish Süper Lig title for the 16th time on May 15 night with a 2-1 win away to Göztepe, clinching the title on goal difference ahead of its Istanbul rival Galatasaray in a tense end to the season.

Galatasaray sealed a deal with Turkish energy company Enerjisa on March 9 that will install a solar energy power plant on the roof of its football stadium that will produce electricity for the venue.

Bulut took the pitch in the starting 11 when his club Yeni Malatyaspor hosted Ittifak Holding Konyaspor on Feb. 20.

Yeni Malatyaspor said on Twitter that the club from Turkey's east awarded the veteran striker with a plate to honor him before the Konyaspor match.

Fenerbahçe hosted Galatasaray at the most anticipated game of week 24 at the Ülker Stadium.

In the 39th minute, Galatasaray goalie Fernando Muslera produced a brilliant save to tip over a strike from Jose Sosa.

Neither team was able to break the deadlock in the first half.

Galatasaray completed the signing of three players on Feb. 1 to bolster their squad to win the Turkish Süper Lig title.

U.S. right-back DeAndre Yedlin joined the Lions on a free transfer from Newcastle United and signed a two-and-a-half year contract with the Istanbul club.

Turkish female point guard Işıl Alben announced on June 15 that she has parted ways with the Galatasaray women's basketball team.

"The club unilaterally terminated my new season contract on Jan. 31, 2020. I was called to meet in the first week of February and said that I was ready to make my sacrifice," she said on Instagram. 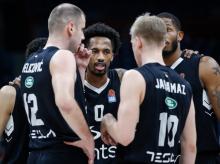 "Sportando" reports that these teams received an invitation on the same day when it was announced that Darussafaka, Ritas and Bilbao had officially transferred from the Eurocup to the FIBA competition.
Partizan is currently a member of the Eurocup and the only representative of Serbia, i.e. the ABA league, in the quarterfinals of the competition that may be played in our country.

Turkish Super Lig club Galatasaray said early on May 15 that a member of its staff has tested positive for the novel coronavirus.

In a statement, the club said the team- including players as well as head coach Fatih Terim- plus the technical team and health, executive and support staff underwent polymerase chain reaction (PCR) testing.