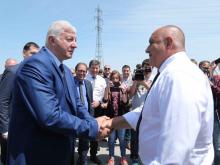 Prime Minister Boyko Borissov opened in Pazardjik a plant for production of automotive parts of the German company Kostal.
The ceremony was also attended by the Deputy Prime Minister Tomislav Donchev, the Minister of Finance Vladislav Goranov, the President / 2012 - 2017 / Rosen Plevneliev, the Mayor of Pazardzhik Todor Popov and the management of the company.