Several thousand supporters of Albania's opposition centre-right Democratic Party showed their strength in Tirana on Thursday at a rally demanding the resignation of the speaker of parliament, Ilir Meta.

Tom Doshi, a former Socialist Party MP, has caused ructions by claiming that Meta paid an assassin to have him and one other MP killed. 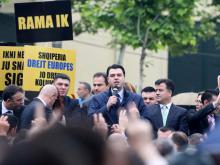 Supporters of Albania's opposition centre-right Democrats plan to gather on Thursday in front of the government office in Tirana amid allegations of a murder plot involving the speaker of parliament, Ilir Meta.

The former Socialist Party MP who last week accused the Speaker of Parliament, Ilir Meta, of plotting his murder on Thursday said he learned of the plot after the assassin repented and told him the details.

Tom Doshi said the assassin told him that Meta had paid him 500,000 euro to kill him and an opposition Democratic Party MP, Mhill Fufi.

Tom Doshi, a businessman turned parliamentarian, lashed out on Monday against the speaker of parliament, Ilir Meta, accusing him of plotting to assassinate him and an opposition MP, Mhill Fufi, while accusing Prime Minister Edi Rama of turning a blind eye to the plot.