The Greek bourse followed on Tuesday in the footsteps left by major foreign markets over the last couple of days, taking its benchmark just over the 760-point mark, though banks had less to do with that growth than other blue chips. Turnover saw a marked improvement too. 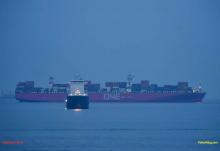 More than 25 cargo ships were waiting outside the port of Piraeus on Wedneday, unable to approach it as the Greek port pilot service called a 48-hour strike, creating major delays and serving a blow to the port's international prestige.

Eventually the strike was ruled illegal in court, but this isn't the first time the pilots have decided not to work in recent months.

The impressive rebound by bank stocks led the benchmark at Athinon Avenue back up to within sniffing distance of 800 points, and the risers outnumbered the losers by almost three to one. After three days of decline, it was considered about time for this market recovery, as there is no obvious reason for stocks to head lower at this point.

The benchmark of the Greek bourse slipped to a three-week low while turnover was the smallest in three months on Monday, partly due to a US holiday that kept buyers away. The reopening of brick-and-mortar stores apparently had little effect on the stock market, which is eager for some assurances this will not be a mere blip.

Just like in Tuesday's session, stocks started with gains at Athinon Avenue on Thursday but eventually had to settle for losses. Despite the positive start on Wall Street, the closing auctions at the same time in Athens took the main index lower, beyond -1%, on increased turnover.

Container handling at Piraeus Port Authority recorded a marginal decline in 2020, significantly smaller than that recorded in Northern Europe or in the rest of the Mediterranean.

Sources say last year closed with a drop of just 3.75% in handling activity, which owner Cosco Shipping officials consider to be quite a feat given the recession in global trade due to the pandemic.

Fresh hopes of a Brexit deal on Tuesday gave stocks across Europe a fresh push, with Greek stocks following suit to take the local market's benchmark back up to within striking distance of the 800-point level. Turnover has increased in the last few sessions, this being the last full trading week of the year.

The Greek stock market has not seen a streak of 14 northbound sessions in a row since 1997, or at least it hadn't until Wednesday, as news of the upcoming Covid-19 vaccine program - a light at the end of the tunnel for the economy too - sent shares higher again.

Cosco Shipping has asked Greece to hand it another 16% of the share capital of Piraeus Port Authority (OLP), in which it already holds a 51% stake, citing Greek authorities' delays in the licensing of the investments the 2016 concession contract provides for.

Greece's highest administrative court, the Council of State (CoE) opened the way for the Piraeus Port Authority (OLP) to build a shipyard in the shipbuilding and repair zone at Perama, west of Greece's main port, by annulling an earlier ministerial decision blocking it, it was announced on Wednesday.