Moldova's pro-Russian president and government want to turn Europe's poorest country into a building site before the presidential elections in late 2020. And they want Russia, Turkey and China to fund it.

Russia has refused to increase export quotas for Moldovan goods for 2019, setting a quota of 15,000 export permits for Moldovan producers - 3,000 less than in 2018.

The Moldovan Economy and Infrastructure Ministry on Wednesday said Russia wanted Moldova first to increase the number of permits for Russian transport operators.

Human rights activists from the "Occupy Guguta" movement in Moldova unveiled a banner on Tuesday night at the national football match between Moldova and Turkey, with a critical message for the authoritarian Turkish President, Recep Tayyip Erdogan.

In Victor Gaiciuc, Moldova's pro-Russian president has another friend and ally in a position of power. 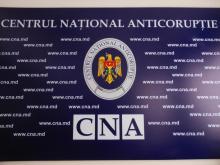 Moldova on Monday selected the Secretary-General of the Presidency, Ruslan Flocea, as the new head of the National Anti-corruption Centre, CNA.

The Commission for the Judiciary, Appointments and Immunities of the Moldovan Parliament held a contest for the post of CNA head after having extended the deadline for the submission of files on candidates by one week. 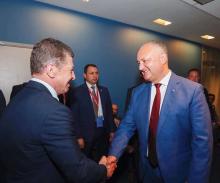 The General Prosecutor's Office in Moldova announced on Tuesday that it has initiated a criminal investigation into the country's pro-Russian President Igor Dodon over allegations that his Socialist Party has received up to $1 million a month from Moscow.

Moldova faces a fresh political crisis after the Constitutional Court declared the new government, led by the pro-European leader Maia Sandu and sworn in on Saturday, illegal.

The Court, which is widely seen as heavily influenced by the Democratic Party, also ordered the dissolution of parliament, which means new legislative elections must be held.

The pro-European political bloc ACUM and the pro-Russian Socialist Party, PSRM, held talks on Tuesday about the possibility of establishing a new parliamentary majority in Moldova after almost three months of political deadlock.

The negotiations started after US, EU and Russian officials visited Moldova on Monday. 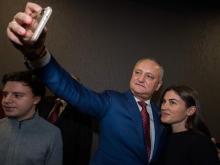 Moldova's pro-Russian President, Igor Dodon, has called on all members of the huge Moldovan diaspora in Russia to vote in the next Moldovan elections on February 24, 2019, whether or not they have issues with their Russian work and residence permits.

He has promised that Moscow will turn a blind eye to such problems if they come home to vote.