OTTAWA -- NATO will have to consider permanently stationing troops in parts of Eastern Europe as a result of the increased tension between Russia and Ukraine.

This is according to the alliance's top military commander, quoted by Reuters.

There has been a revival in the interest of major long-term investment funds in Greek privatizations, which will now gain fresh momentum through the promotion of sell-offs via the stock market, according to Yiannis Emiris.

The reading had dropped at a revised annual pace of 0.4 percent in January, less than previously estimated. [Reuters]

Bank of Cyprus will release some of the 933 million euros of deposits still frozen under a recapitalization of the bank last year, it said on Wednesday. [Reuters]

Greece will formally propose stretching the maturity of its international rescue loans to up to 50 years as part of measures to make its debt sustainable, a senior Greek finance ministry official said on Wednesday.

Russia: EU does Washington's bidding, should be ashamed


MOSCOW -- Russia has criticized new sanctions against its officials over the role of Moscow in the crisis in Ukraine, saying that the EU was influenced by Washington.

That is something the EU should be "ashamed of," the Russian Ministry of Foreign Affairs noted.

Industrialized nations' greenhouse gas emissions fell by 1.3 percent in 2012, led by a U.S. decline to the lowest in almost two decades with a shift to natural gas from dirtier coal, official statistics show.

Japan joins EU and U.S. in sancions against Russia


TOKYO -- Japan has introduced visa restrictions for 23 Russian citizens, a day after the United States and the European Union introduced new sanctions against Russia. 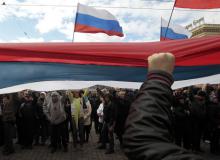 
LUGANSK -- Pro-Russian activists in the town of Lugansk in eastern Ukraine on Monday proclaimed "a people's republic," there and sent the authorities in Kiev an ultimatum.